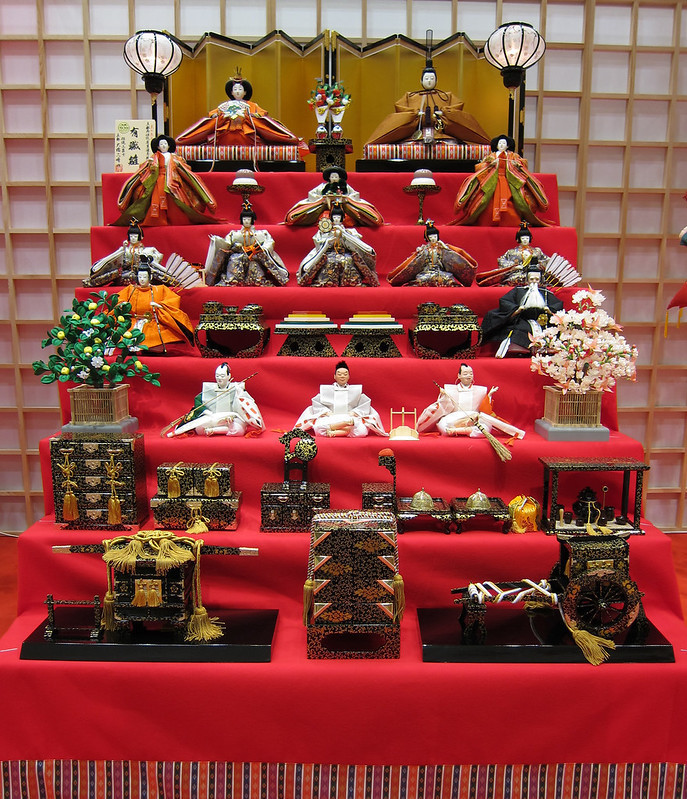 Dear newsletter readers,
This is Mari writing this week.
Last time I wrote, I said happy new year to you. Now, it is already March!
Can you believe it? Time really flies!

March 3rd is "Hinamatsuri", girl's festival to celebrate the growth of girls in Japan.
We display special dolls called "Hiinaningyo".
The most luxurious set has 7 steps, 15 dolls. There are Emperor and Empress on the top step,
3 woman servants on the second step, 5 musicians on the third step , 2 ministers on the fourth step, and 3 man servants on the fifth step.
The sixth and seventh steps have wedding tools such as a chest of drawers, mirror stand, sewing box and so on.
The top picture shows the traditional full set of "Hinaningyo".
There are also 5 steps sets which don't have the lower two steps of wedding tools, and
3 steps sets which have only top three steps. The most simple one is just a pair of dolls,
an emperor and an empress. Since the luxurious sets require a room to display, simple
sets are more popular in these days. However, it is still Japanese tradition to display "Hinaningyou" in
February and March.
My grand parents bought a pair of "Hinaningyo" for me when I was born. Back then, my parents
were young and didn't have enough space to display a full 7 steps set of dolls at home, so
the simple pair of dolls was good enough for me.
As a child, I enjoyed display and watch them around this time of year. 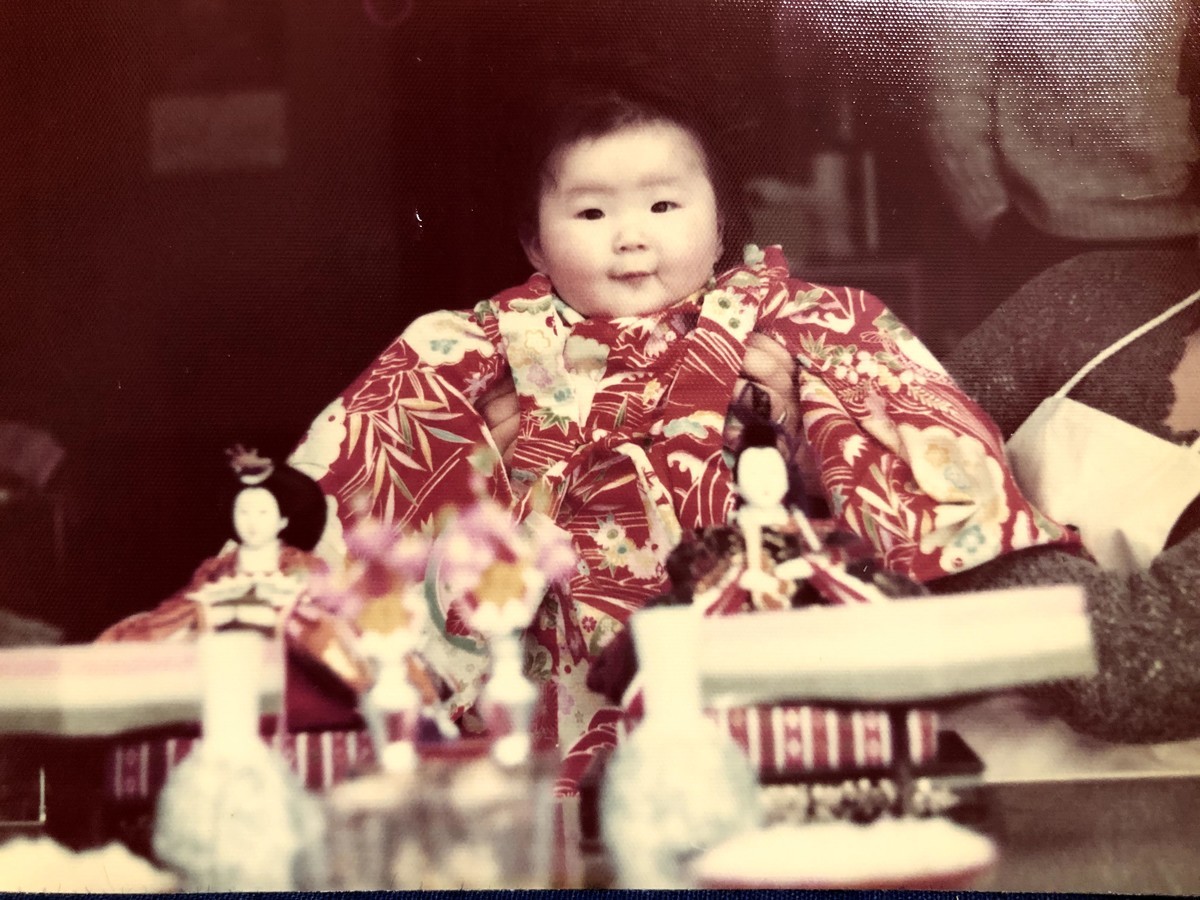 Later, my two younger sisters joined our family. Then, my parents bought a pair of dolls to
each one of them because they thought it is fair to give us our own "Hinaningyo".
In that way, there are total three sets of dolls in our house. 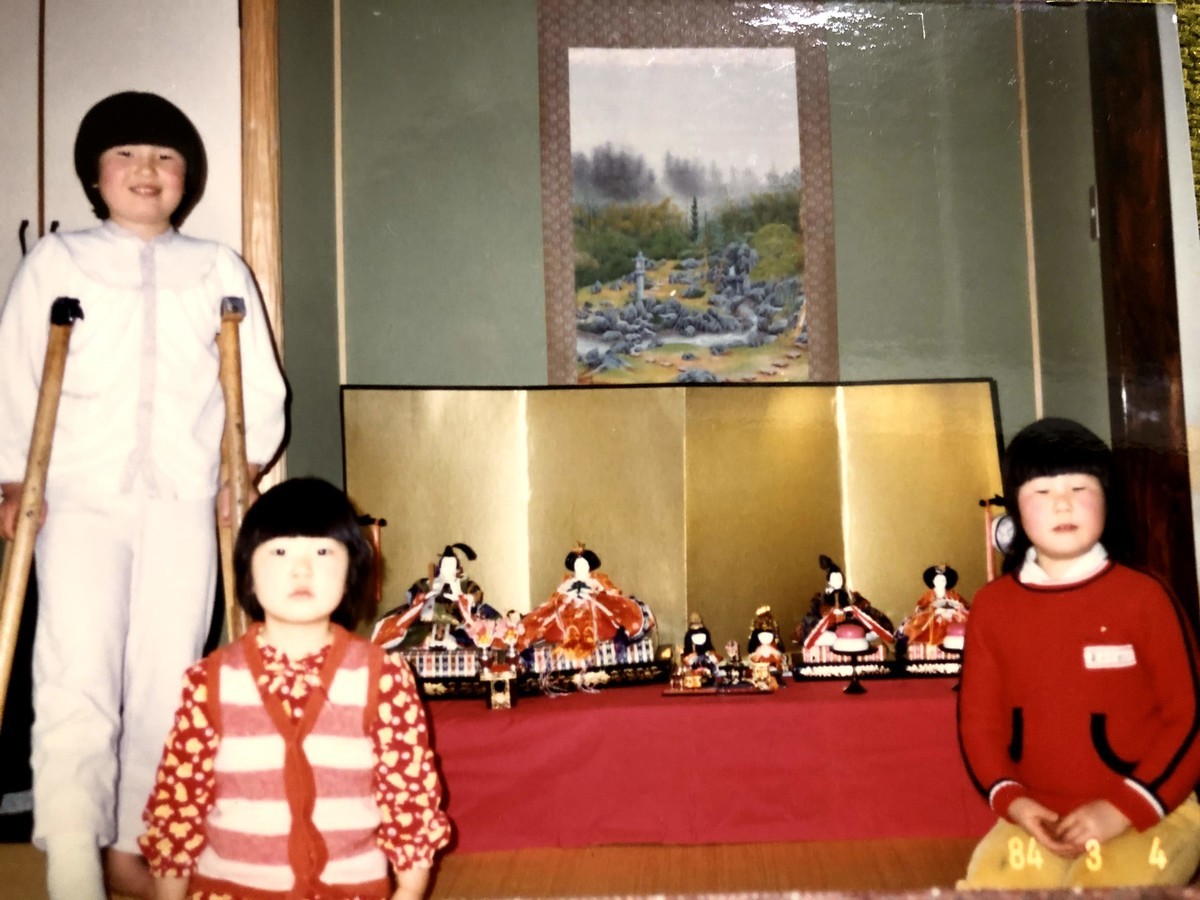 (I broke my leg right before the picture was taken. So, I'm wearing a cast...
My sisters still tease me when we see this picture.) 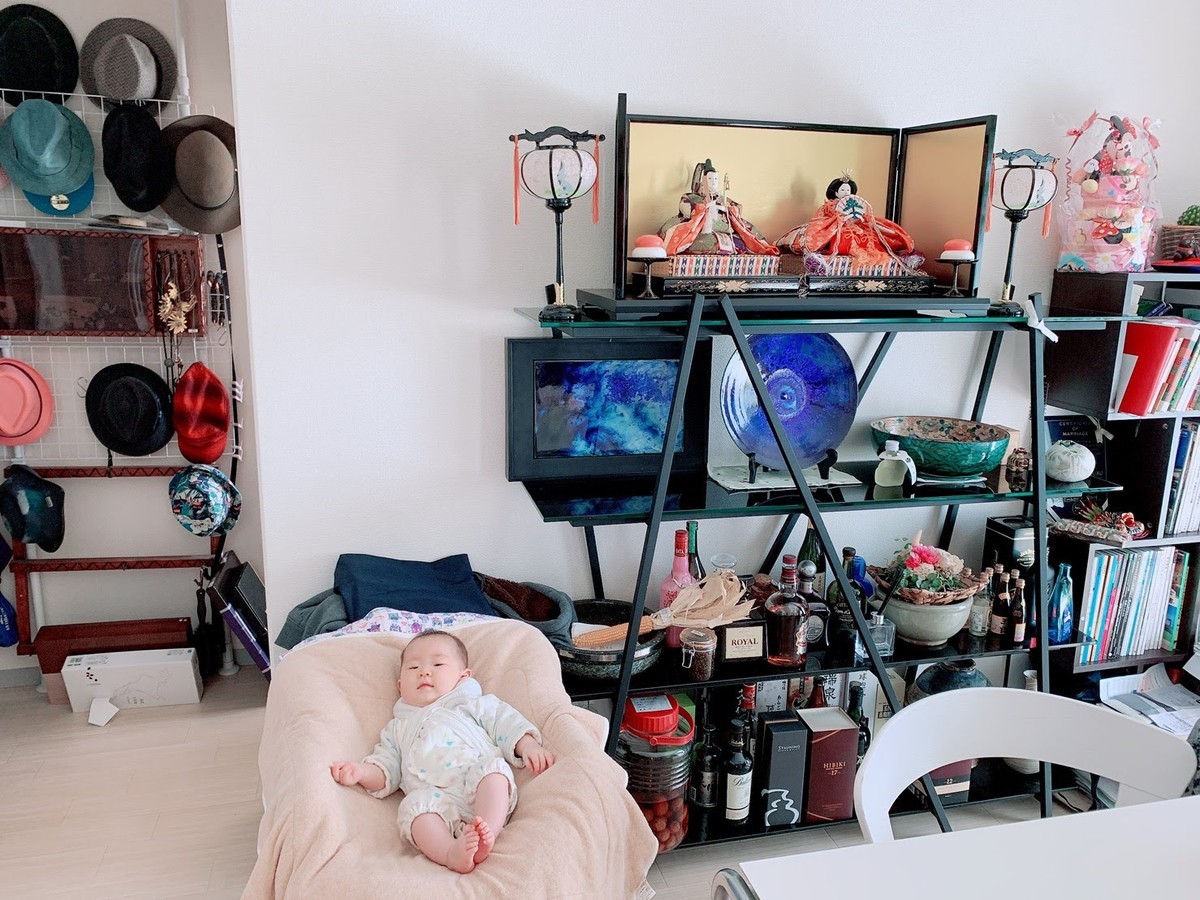 Last year, my baby sister gave a birth to a girl. She is my first niece.
My sister displayed her dolls at their place to celebrate her daughter's
first "Hinamatsuri". The dolls will be inherited by my niece. My sister told me that
she will dress her baby in the red kimono which we wore when we were babies. (The one
I'm wearing in the above picture.) We are glad that our mother has been keeping our
kimono and dolls in good condition. Since I don't have a daughter, my dolls are still in
my parents' house. Writing this newsletter made me feel like I want to display them at my place
even though I don't have a daughter. I will celebrate my "Hinamatsuri" again from next year on!
In traditional way, girls wear kimono, and have a party with their girl friends.
Girls Kimono are here!
http://www.ichiroya.com/sp/list.php?spid=S5e55eabdbe26a
If you have daughters, nieces or grand daughters, why don't you dress them and take pictures!
They must be really cute in Kimono!
Thank you for reading until end. See you next time!
« Kimono Flea Market ICHIROYA's News Lett… Kimono Flea Market ICHIROYA's News Lett… »
プロフィール