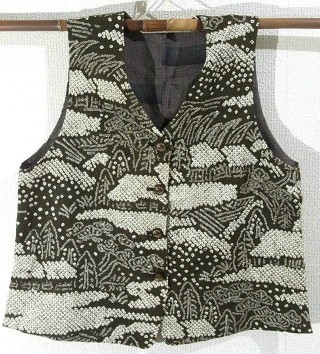 I hope it is not too cold at where you live. It is Daikan (the coldest time of the year)season here and so chilly! We went to Ichiro's parents place today and snow from last week remain on the ground. They live in north part of Osaka, so it is different from Tondabayashi, which is southern part of Osaka and we have no snow at all.

You might recognize this photo- I showed the photo some months ago to introduce Okuizome ceremony of Jin(our grandson).  I am a Baba-baka(doting grandmother) but this time I am not showing off the cute Jin(he is growing and cuter now!). I would like you to take a look at Jin's great -grandmother's vest. 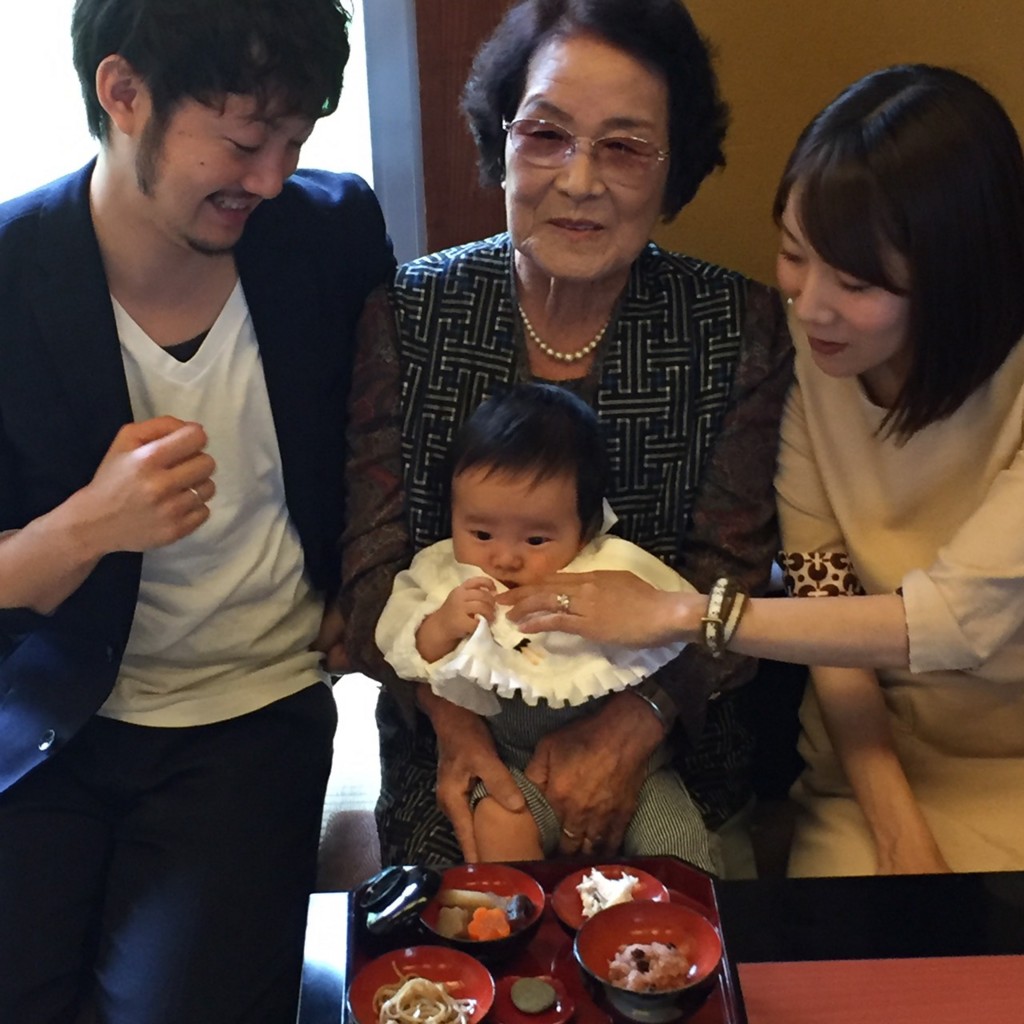 The vest is made of her kimono. It is Oshima tsumugi, fine type of woven pattern silk.

Oshima tsumugi was (and still is) people's favorite type of woven pattern kimono. Oshima tsumugi have its particular charm of colors and crisp touch and they are very strong. Oshima tsumugi silk are said to last decades or one hundred years and they are possible to re-tailor repeatedly and can be used both sides. Not only Teru san(Jin's great-grandmother) but many people make vest, skirt and other outfit from kimono they have.

Many books and text about kimono-remake are sold and major seniror women's  magazines often have special issue of kimono-remake.

When I search with a keyword `kimono-remake' in Japanese, there appear so many photos:

They are mostly in Japanese only but I hope you can enjoy the photos.

Most women in Japan have some kimono  in tansu(chest), and among women a little older than I am,  kimono remake is quite popular. Just like Terusan, they use their own kimono to make something easily worn. You may think cutting kimono might sounds cruel thing but making something which can be worn again is good, rather than having them stored without being worn.

We find many customers from abroad making SO CHARMING outfit using kimono fabric, kimono or obi and seeing those beautiful work make us so happy. It is one of the blissful moment which make us feel so good to keep this business.

There are many people like Teru san,  making favorite kimono to something they can wear now and enjoy.

Recently, those kimono-remake is progessing and I think people are becoming more and more free and colorful to create their  own  fashion. It seems kimono-remake is not only for older women but it is accepted more widely now.

Recently, there are new type of dress using kimono.
It may not be called kimono-remake, it is more like different type of dressing, using kimono to dress like a western dress without `cutting'. We like to talk about this topic in our future newsletter.

This time I like to show this video which is from 7 years ago.

The first part is about the event of four artists and their work using kimono fabrics. The last half is a nice example of kimono-remake. A fashion designer Yurie Yamada who was not interested in kimono originally got a big shock meeting Shigeko Ikeda(she is the most famous antique kimono collector in Japan)and started kimono-remake. There are two young women who asked her to make their wedding dresses using their mothers’ kimono. Those kimono were worn by the mothers on their Coming-of-Age ceremony.

One of the kimono was in a chest for 40 years, the mother says.
The both kimono were made into their daughters’ dresses for wedding reception.

The photo of the top of this newsletter is a vest from our website.
We do not have many kimono-remake things and we hope we can add charming fabric, kimono and obi to inspire you to create your own outfit!