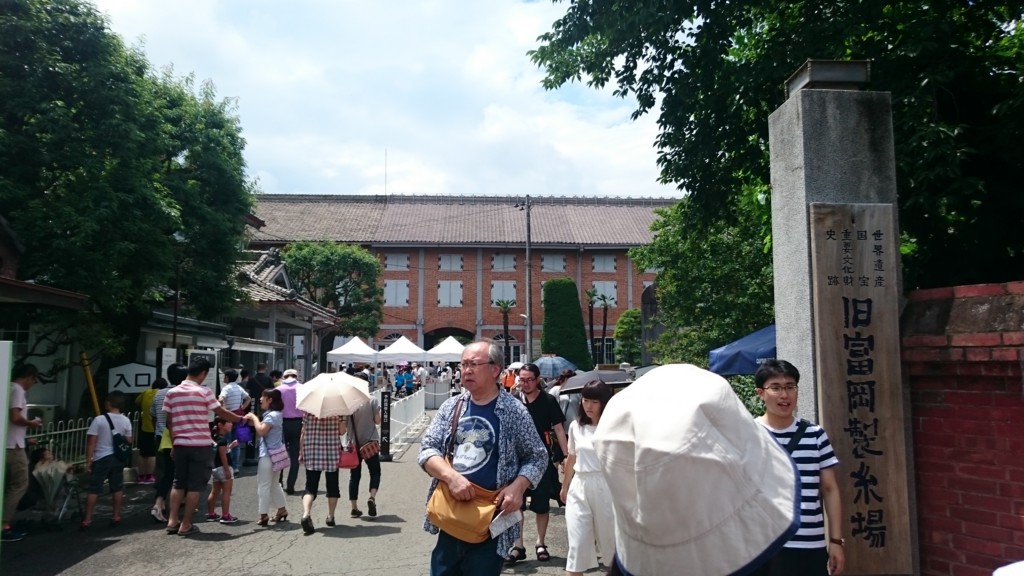 Hi, newsletter readers. This is Mari.
I say summer is over in Osaka. I put all my Yukata and
summer kimono away for this season. Although summer is
short, I enjoy wearing them so much.
I received emails from some of readers who tried the
"Fusen-Otaiko" obi tying style after they read my last
newsletter. I'm glad that I helped them to try new
look of summer!

I visited Tomioka Silk Mill on the other day.
It is located north east of Tokyo. It takes 1hour and half
by Shinkansen(Bulit train) from Tokyo.
It is a world heritage and national treasure.
Silk was the best exported item of Japan in
Meiji period(1868-1912). Believe it or not, Japan was the largest exporter of silk at that time. When Edo period(1603-1867) ended, Japanese government promoted modernization of industries and technologies to achieve equal status with Western countries.

Exporting silk was the best way to gain foreign currency at that time. It was necessary to build a modern, western style silk-reeling factory to produce high quality silk which fulfill the Western countries requests. 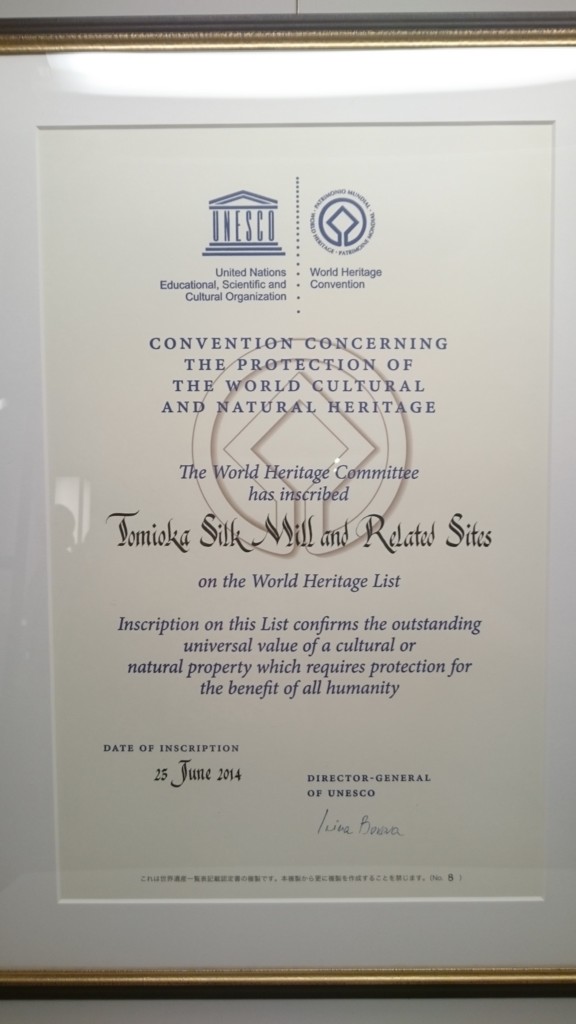 1) Sericulture was already prospered in Tomioka.
So that, there were good quality cocoon there.
2) A large land was available to build the mill.
3) There was enough clean water which was necessary for
producing silk from a nearby river.
4) Coals and power steam engines were available in the
nearby towns.
5) Local residents agreed to the construction of a factory
directed by foreigners.

The guide who gave us a tour of the facility said that the #5 was the most difficult condition which Japanese government had hard time to fulfill. Japanese people were not used to see foreigners back then. So, people afraid to have foreigners in their town. Tomioka, a very small town, was the only one site which fulfilled all the condition among other candidate sites. 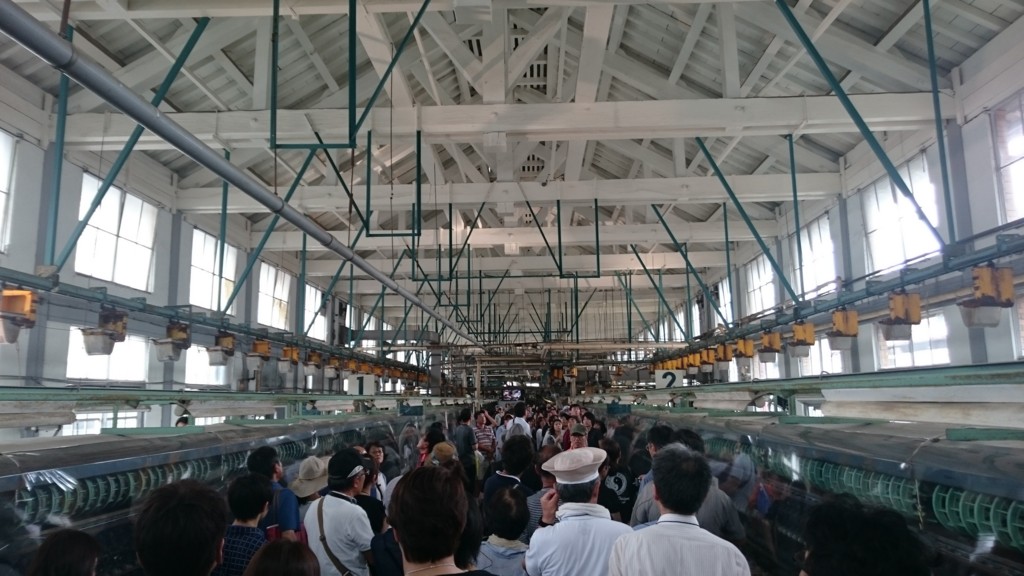 Japanese government built the mill, and hired a French director and engineers.
Even after they built the huge mill, then the government had hard time to gather young ladies who work at the site. Again, they afraid to work with French leaders.

Later, a couple of hundreds girls worked at the mill.
They came from all over Japan. After they worked hard and
learned how to reeling silk, they went back to their home and
taught their technique to others. That movement supported to produce high quality
silk, and make Japan wealthy and strong. 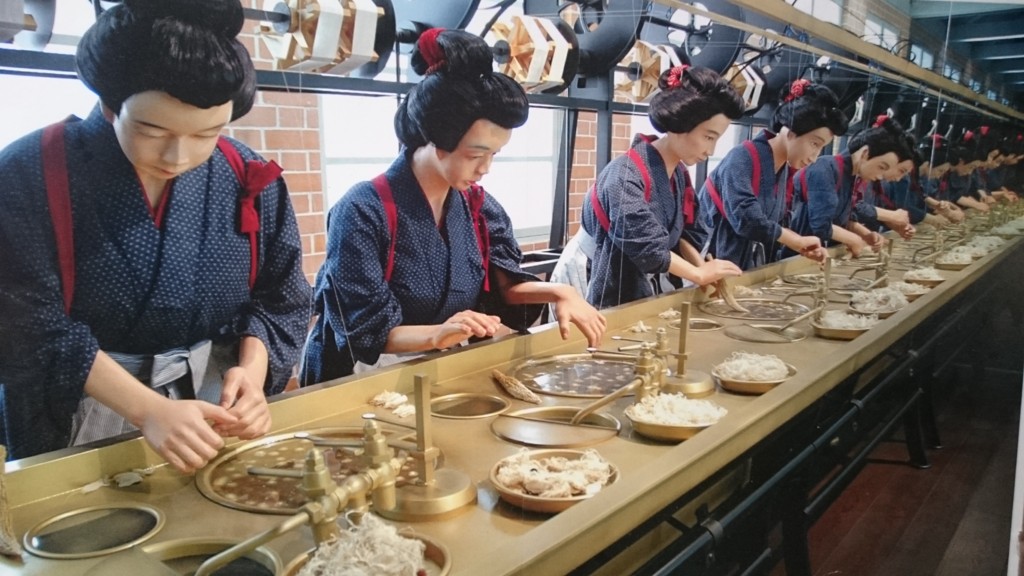 We, Japanese people, were wearing Kimono at that time. As you already know, most of kimono and obi are made from silk. Japanese people used to grow silk warm, spin yarn, weave silk, then sew kimono at home. Silk and kimono were very close to our life. Visiting Tomioka Silk Mill reminds me how close silk was to our life back then. I need to put my cell phone away and spend more quality time in kimono!

The tour was very interesting and educational. I learned a lot about history of Japanese silk. Although the mill is no longer in function, Tomioka is still one of the major produce centers of silk in Japan.
Why don't you stop by the mill if you ever have a chance to visit Japan with Japan Rail Pass!

(There is a short note about Junko- who made cute umbrella, bags and dress from one piece of yukata. Her sister is a jewelry artist and her exhibition is held in KYOTO SAGA UNIVERSITY OF ARTS.

If you happen to be near Arashiyama, Kyoto and if you are interested in handmade jewlry, Junko's sister, Ryoko Hayashi will be there showing her work!) from Sep 24 to Oct 30.